This past weekend featured several crystal-clear nights leading up to the full moon on Saturday evening.  The best walk was Friday evening on the western end of the Forest Loop Trail.  The leaves weren’t all down yet, so there were large splashes of light streaming through the breaks in the canopy.  Even in the dark shadowy areas, there was enough diffuse light to allow an easy passage.

I am looking forward to November when the leaves will all be down.  Then, the full moon is truly magical as it illumines the dark, bare rolling woods.  For another contemplation of a moonlit walk, see Woods Walking #8, “Farewell to Winter.”

So after reading Woods Walking #9, “Three Nights of Affirmation,” the skeptic would ask, how do I know that my Beatific experience was a “spiritual” encounter?  How do I know it’s not just some psychological phenomenon, an overactive imagination – or even just a very pleasant dream?

These are all fair questions.  And to the hardened skeptic, there’s no adequate response.  How does one take a deeply personal, experiential event and “prove” its authenticity?  How does one describe their love for another person?  How does one communicate the deeply moving feeling of beauty communicated by art, music or nature itself?

Empirically, any of these would pose a seemingly impossible task.  I can’t “replay” the spiritual experience on screen or provide an intimate empathic connection to the lived experience.  Perhaps in one disposed to his or her own spiritual capacity, a laying on of hands, or what Hinduism refers to as Shaktipat—the conferring of “spiritual energy,” may be enough to bring the skeptic along.

Perhaps one could be attached to electroencephalograph (EEG) equipment and compare the readings during the recounting of the spiritual moments to control recordings.

But still…for those who have experienced deep, spiritual encounters, how do we know?  For me, I know that I have followed a long path of consistent experiences that have become a cherished part of who I am.

To provide a glimpse of my own further affirmation of the spiritual, I will refer to another personal experience, in this case my first spiritual encounter.  It is one of a very different nature and one that took place at a time of, for me, early true innocence.

My mother suffered from Epilepsy, with the onset of symptoms beginning not long after I was born.  She regularly took medication and I don’t recall if it was Phenobarbital or some other medication developed later.  Nonetheless, one day when I was three years old, I had observed my mother taking her medication, and being curious and wishing to emulate her activities, I climbed up to the high cabinet where the medicine was kept and consumed some of it.

I don’t know how much I took, but I do remember, very shortly after swallowing the pills, staggering toward the couch in the family room before losing consciousness.  After blacking out, I had an out-of-body experience, initially seeing myself from a vantage point off to the left seeing myself on a gurney with people surrounding me, working very intensely.

My next brief memory was coming to just long enough to see someone putting the tube into my mouth that was used to pump my stomach.

The next memory was the classic “bright light” experience, similar to others documented in near-death experiences.  Seeing the bright light, I was drawn toward it.  It seemed to be a long way off and as I began to move toward it, someone, a spiritual presence, came to me from the direction of the light, and without words, turned me back, communicating that I return.

The image I saw after I was turned around was the classic big blue Earth floating before me.  It looked just like a picture taken from about half the distance to the moon, based on pictures I’ve since looked at taken during lunar missions.  Keep in mind that this took place about 1959, which is well before any such picture had been taken by the nascent American and Soviet space programs of the time.  Yet that beautiful image, that memory is very clear.

Once a photograph of the Earth, taken from the outside, is available a new idea as powerful as any in history will be let loose. ~ Fred Hoyle

As I began to move back toward Earth I lost consciousness again.

My very next awakened recollection was after coming to in the hospital.  My dad was in the room with me and I clearly remember asking him if we owned any of the airplanes we’d see during our regular weekend drives by Lunken Airport.  I asked that question because I had a brief dream before waking of the old blue and white DC-3s we’d see parked at, what was then, the Procter & Gamble hangar on Wilmer Ave.

What is affirming for me is the consistent experience of the mode of communication in my various spiritual encounters.  In Woods Walking #3, I first used the term “innate intentional communication.”  That’s as concise a description as I can give: innate given the deeply intimate nature; intentional given that there are no words spoken; and communication because there is a clear intent or meaning that is conveyed.

I tell this story, for the first time publically here, because the experience has helped to take me from a sense of religious faith to a sense of spiritual actuality; of participation in a spiritual reality that extends beyond what we know through our normal five senses.  It also confirms the viability and reality of a personal spiritual being–our soul–that continues on after passing from our host, physical bodies.

My personal, organic spiritual self is affirmed in this experience.  And to have ongoing experiences that know Sublime Love and spiritual intimacy testifies to the reality of the traditions of revelation that inform the many religious faiths celebrated by humanity for millennia.

In the Welcome to Woods Walking, I mentioned that this spiritual capacity is indeed in our nature as human beings, and I take the risk of sharing these experiences to communicate and confirm a rich capacity, a spiritual potential that lies dormant in so many of us.

Such awareness and actualization on a personal level is at once awe-inspiring and humbling, but also very exciting for the truth–the reality–that lies behind the human experience of the Divine.  And on the scale of the Body of Humanity, both living here and now, and for those “Risen” before us–the miraculous spiritual reality that calls us together, has literally unlimited capacity for Good.

So, to the skeptic, I ask that they consider the cultivation of their own truest and fullest self.  Our corporal lives are but a flash in the continuum of time and space.  To deny one’s own eternal, spiritual capacity is analogous to striking a match and letting it burn out to a wisp of smoke without setting the larger fire ablaze.

The strident humanist, the strict empiricist are but Doubting Thomases who would limit their own horizons, standing on the comforting shores of a relative certitude that they might never leave.

A far greater comfort and a boundless Love awaits. 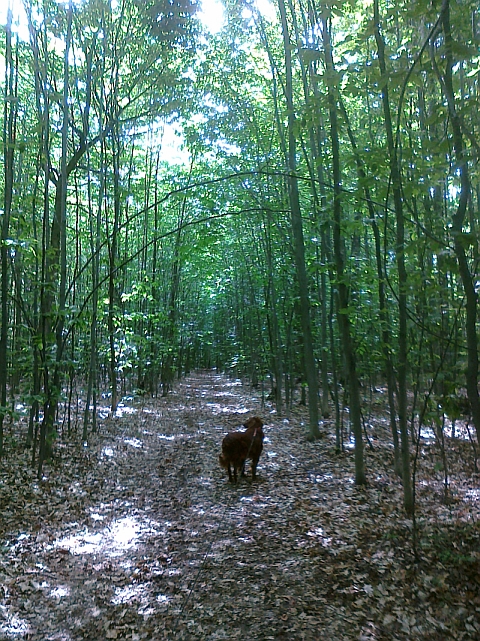 The Beautiful Path & Cathedral to the Sky