At about 7:30 PM on Christmas night, Trevor needed his walk and I needed to walk off a little Christmas cheer.

It was in the mid-thirties and gusty outside, so I pulled on my ski cap, a fleece and a jacket and ventured out to take in the evening. After a somewhat gloomy day, the evening sky swirled with a constant train of broken stratus clouds in a headlong rush from the southwest to the northeast. On the satellite view before heading out, the stratus appeared like the long wispy arm of a spiral galaxy as they rotated around the strong low pressure system that was centered over the upper mid-west.

Once outside, the cloud tops and edges glowed with the light of a half-moon set in a crystalline sky speckled with stars. We followed the eastern track of the clouds in search of the “The Star in the East.” Gemini’s Pollux became my muse as I looked up when we turned right onto Observatory. 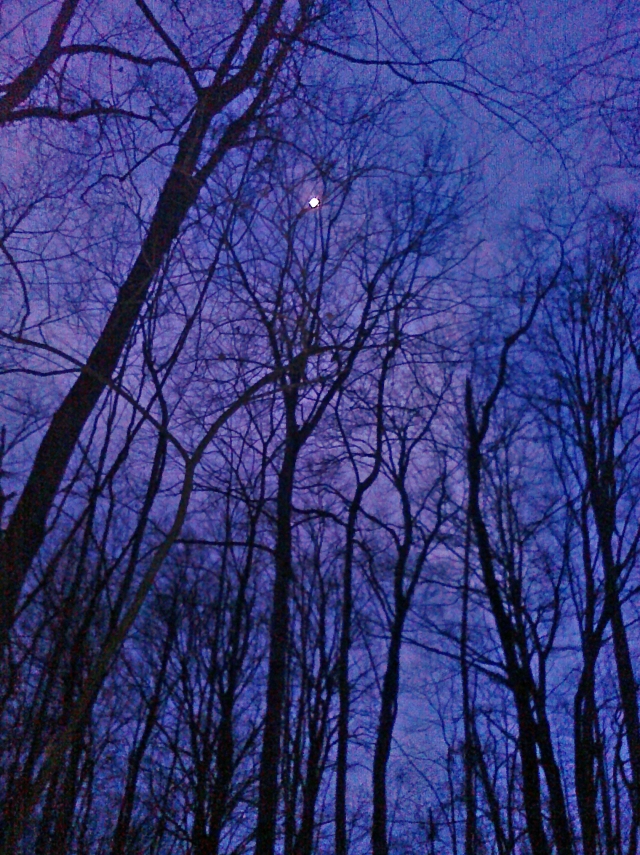 We followed the eastern star down the Valley Trail and ventured about halfway to the trestle, stopping just past the bowed sapling on the creek side of the trail. The quiet of the woods was a welcome respite from the days-long holiday rush and the happy bustle and chatter of family gatherings: all the traditions that mark the celebration of this Blessed Day.

At first, the woods were bathed in a quiet, muted breeze drawing through the trees. But then legions of molecules began their charge in strong gusts; first from the right, then the left, then from behind. It was surprisingly easy to track each gust as they marched along the tree lines. The dark, veiny, feathery trees bowed to the gusts and swayed back into place as the wind passed in a graceful choreography of a corps de ballet. The south hills, the north and the western hills all danced on cue to their charges.

The moonlight threw clear shadows on the ground until it ducked behind passing clouds. Then, diffuse light illumined our path and the swaying woods.

As I took in the scene it was easy on this blessed night to yield to a deeper sense. From the initial aural and visuals to the chill on my nose and cheeks, to the lifted mind that listened — slowing time and drawing in the peace of the moment. The enduring, eternal beatitudes took their places among the stars as I gazed up through the swaying trees and let my prayerful mind reach out and drink in the true sense of Peace that was palpable in the moment.

It was easy to imagine a manger up on the hillside and a scattering of shepherds’ camps, goats and oxen, all attuned to the Gift that now resided there.

The glittering Beauty, the enduring Hope, the Grace of that evening’s “Good News” sank in as it has done for the saints who preceded us for two millennia, and will do so for the saints that follow us, living — and breathing the Word of the Lord.

The intuition of this Christmas evening yielded a kiss of Peace that poured down on me, filling me with an energy that ran from my head to my toes and lightened my spirit, connecting me intimately with all that was around me – the immediate, the timeless and The Good.

Answering the call.
View all posts by rudyink →
This entry was posted in Woods Walking. Bookmark the permalink.